OG Black Pudding
The biggest baddest slime, and one you must kill with fire. Not a big deal if the GM allows for mundane pyrotechnics from torches and burning oil to inflict damage, but without such molotovs, the only hope for many parties would be that 'it avoids fire.' How much fire is not stated, but a feeble line of candles being the only line between the party and death by acid is pretty great, especially if torches and lamp oil will not actually harm the creature, but only ward it off.

A few things of note one might not realize about this iconic slime monster is that, despite the size, it creeps across ceilings and walls as well as floors, making pits only a delaying tactic and it likely just as prone to unusual angles of attack as smaller slimes. They also come in brown, grey, and white variants, which are expanded upon in the MMII, the major differences being
All in all I am not particularly thrilled by these variants. Half the appeal of a black pudding, to me, is the idea of trying to manage a dungeon where you cannot kill it and must instead evade or distract it while continuing exploring. Terrain-appropriate puddings encountered in the wilderness seem a tedious exercise in kiting a (relatively) slow creature around on horseback while the mage flings magical death at it, or for a fighter to get eaten by some 'mud' or 'ice' that they had the gall to investigate while wearing encumbering armor. And once inside a dungeon, some out of place 'mud' or 'ice' might provide a scare a single time, but after that lacks the alien dread that a tide of unstoppable and ravenous black goo has, and instead conveys a sort of palette-swap re-used asset vibe more suited to a RPG videogame than anything. 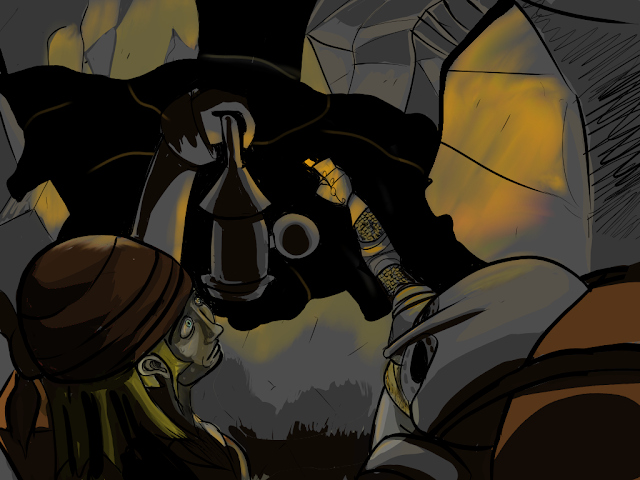 Sunset Realm Black Pudding
While the realms are full of squirming jelly monsters of boundless variety, a Black Pudding is a form of Darkspawn that arises in the slimy depths of the earth, where it stays, relatively harmless, until it is enraged by light. Like all full on darkspawn, their substance is unknowable and primordial until forced into being something specific by a lightsource that outshines their own darkness. Unfortunately for sunlit beings, this means that upon getting near one, the primordial darkness coalesces into the exact most corrosive acid tailored to destroy whatever it touches. Dark and unknown stone of the underground is unaffected, and when unobserved, a black pudding is not acidic at all, and so their environs are not as melted and scoured clean as one would expect from a proper biological organism. Good for looting subterranean ruins, bad for predicting the appearance of a pudding before it writhes into the torchlight, lapping at your ankles like an orphaned nightmare ocean (miniature midnight-black nightmare oceans are of course, something completely different)

Of course, light is not totally unknown underground, for deep below, Yg-A, the Undersun, churns in his prison of molten rock. Black puddings avoid heat as an instinct to avoid destruction by the 2nd sun, and so unbroken lines of flame can ward them off, though they are simply too great a volume of cold muck to suffer any harm from feeble firebombs or torches, requiring magical conflagrations or actual molten metal to harm them significantly. They will not come within about a hand's span of flame, meaning that they will ooze around held torches to attack shadowy backsides, and lines of candles must have no gaps, lest the slime ooze through.