OG APE
Apes, in this case gorillas, are basically bears, statwise, but with 'rending' instead of a 'bear hug' extra damage if both their unarmed attacks hit, and represent both normal gorillas, and mythical man-eater gorillas. Honestly there's not much more to say about them, other than they can provide a certain swords-and-sorcery vibe to use them as trained guards of some probably shirtless sorcerer in a desert tower.
GORILLA OF THE SUNSET REALM 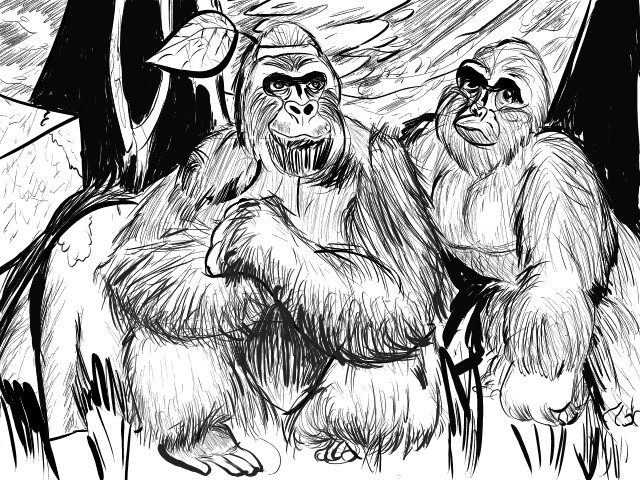 The original mammalian bipeds of the realms, raised from the heat of Yg-A (like all animals) and the machinations of Yg in the volcanic jungles of ancient times. Intelligent but animal-souled and less prone to existential folly, they were prototype Elves, and indeed elves who have decided to live in the wild places of the world, forsaking their crystal castles and artificial glories, tend to get along quite well with any enclaves of gorillas they find.

But the Ape-Men once built ancient temples of their own, directed overtly or covertly by the greater Serpent Empire that the Apes were borne of, and though most modern gorillas do not recall that once they too had sorcerer kings and stone temples, the ruined temples of forgotten gods can be found in secluded archipelagos of the Beast Islands, and occasionally in monster-haunted jungles of the continental Moonlands. Though humans are ill-formed to use ancient copper gorilla arms and armor, their plus-sized jewelry is still quite tempting to treasure-seekers.

Eventually, the ape experiment was replaced by the serpent's experimentation with Elves, but then Yg-A, the second sun, the Dragon-Sun, fell into the earth and the Serpent Empire collapsed in the chillier climate. This marked the second intersolar period, where all the world was lit only by flame, for in those days moons feared dragons. The warm-blooded Elves arose and banded together with all the people of the earth in casting down the firewyrms, but quickly followed the footsteps(such as they are) of the Serpent Empire and created their own servants from ape-stock, while the rest of the gorillas, forgotten now by both their creators and their creator's creations, faded into obscurity and were content to live as exceptionally clever animals, civilization being more trouble than it's worth in the minds of most. But not all...

Bandar-Log-
The last civilization of tool-using, Common-speaking gorillas is hidden somewhere in the moonlands near Yuba and Saresare, wary of humans and uninvolved with their wars, but willing to trade for goods they cannot manufacture, sending elephant and rhino caravans laden with shiny baubles to trade for more practical items.  Martial arts schools emulating 'Gorilla-Palm' spring up among the humans, as well as knock-off branches overseen by mandrills (but more on them in the baboon post). One particularly tenacious rumor is that there is a ritual that transforms man to monkey, and that the silverbacks of Bandar-Log scheme to undo what they see as the corruption of humankind from their original forms... but then again, perhaps intruders to the secret land of the apes are simply imprisoned or slain to keep the place secret from the greed of men.

GORILLA AS RACE
Gorillas cannot throw things further than 10', and require most equipment to be special-fitted to them at great expenditure unless, of course, the market is in Bandar Log.
Unarmored, they have AC as leather+shield, and unarmed they can strike for d3/d3/d6 damage, making 3 attacks against the same target. Armed and armored, same as a human.

They must eat x20 the usual (vegetarian) rations as a human, gobbling fruits and vegetables nearly constantly, but if there is heavy vegetation in the area, they can survive off of shoots, leaves, and other vegetation. If there is only sparse or unfamiliar vegetation, such as temperate plains or forests in early spring or late autumn, perhaps half their requirements can be handled via foraging.

Despite being very strong, roll strength as usual- awkwardness in tool manipulation means unarmed is often more effective than armed combat for them, and they do not necessarily have the same endurance as a human when it comes to long weight hauling. However, for shorter feats of strength, a gorilla can move 100 pounds per point of strength it has.

They may sprint at twice the speed of an average human, but cannot keep this up for long-distance.

GORILLA AS CLASS
To hit, XP, saves, etc as fighter.

1-Bigger, Faster, and Stronger Too-
At level one, a Gorilla gets all the incredible abilities depicted above.
2-She Can Float Through The Air, And Climb Up Trees
May brachiate as per ground movement speed, and climb as a thief of equivalent level, but only on natural surfaces like cliffs and trees.

3-He Has No Style, He Has No Grace
A bit of humor usually goes over well with humans and you have the advantage of being apart from their social castes and standards of charisma- by causing a social faux pas or slapstick shenanigans, you may reroll a reaction check with no penalties or bonuses based on social class or charisma.

4-Back Again, And About Time Too
You may wander 'off-screen' once per session if not actively prevented from reaching an exit by some circumstance, and return at a dramatically appropriate time, having been off eating leaves or something.

5-Can Pick Up A Boulder, With Relative Ease
You may reroll your physical stats and HP and take the better results each level hereafter.

6+-Silverback
You attract 1d4+Cha Mod gorillas of various motivation, and another one every level. Reroll duplicates or replace them with new ones, or just go down from the top.
1- Suitor, considers you to be hot stuff and has a compatible personality to your own.
2- Hot-blooded rival attempting to one up you and become the new top banana, but has your back at the end of the day.
3- Worried relative trying to convince you to come back to Bandar Log.
4- Spunky younger gorilla (3hd) having the time of their life on an adventure. Thief abilities.
5-Lazy gorilla with magical powers, here for exotic fruits and comic relief.
6-Mutant gorilla cursed with meat-eating and other mutations. Dark past and brooding.

Posted by Wizzzargh at 5:07 PM