World of the Wolf Moons, Painted In Broad Strokes

https://docs.google.com/document/d/1Yx1_Mw3o4Xv5L9a7ZY49Hqlo55becgL6MWbZiZvyUr4
edit from the future- That there link is to the nightmare glog, which pretty much unabashedly sucks.You can go here if you want an even bigger-picture view of the setting, though.

Stuff to Do The thematic elements of the game are somewhat divided by geographic location. As
players this is good to read to get an idea of what sounds nifty and where you'd like to adventure. 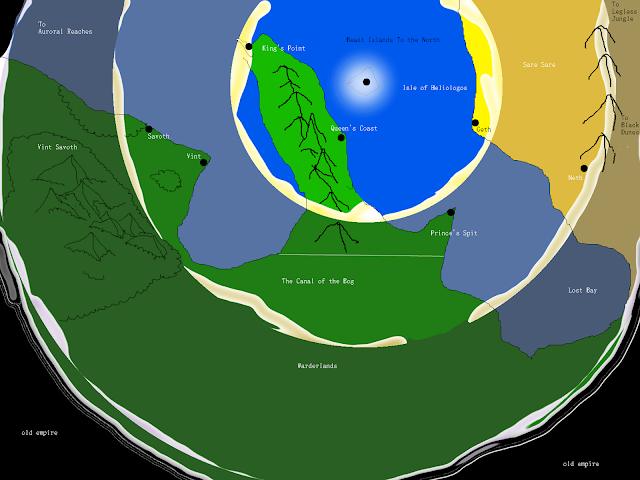 The Noonlands, King's Point and Queen's Coast are where you'd go for political scheming between rival kings and queens and their Lords and Ladies in their castles scattered throughout the land. Overt violence is rare, but not at all unheard of, and there's plenty of fleeing to mountain monasteries to hide from wicked knights and plots to steal the pope and similar nonsense. People are the interesting part of this landscape. King's Point is where the seedy criminal business and stupid plans come to fruition, whereas Queen's Coast tries to hold itself to higher standards of refinement and upstandingness.

Heliologos is where you'd go to have wizard-school shenanigans among a bunch of wine and sun-drenched islanders, with new entertainments coming in monthly from the Beast Islands and stranger things coming from the Astral Gate, if you can get access to it. Good if the entire party is wizards, or if the party wants to blow off some steam with a weird cross-world adventure.

Geth is in the Noonlands and has a lot of politicking between the offspring of the Caliph. And within the old city below, it also has a heavy criminal and 'heist' element in the underclass- rooftop runnings and sewer crawlings alike. And below the city that is below the city, is a Megadungeon, a layer cake of the Geths of old, buried but not dead. The entire campaign could take place within Geth, if a citycrawl is what was wanted.

Daylands
Roads lead to established setpieces, generally villages and fortresses. Going offroad leads to strangeness. These are frontier regions, with warring barons in keeps and castles every 10 miles or so claiming land for King, Queen, Prince, or even themselves.
Vint- A port city that the Blood Moon has never risen over directly. Doesn't believe in the Scourge, attributing it to peasant superstition and baronial mismanagement. Vint is a city of sea merchants who build boats and sell boats and use their many boats to extend military power down the coast. Vint is a city in denial, blind to the creeping scourge rats in the sewers and the serial killer nobles in their ranks, and you should go here if you want to be a street-sweeping vigilante out to either clean up the city and wake up the ignorant populace, or to do dirty deeds that must be done and let the city stay blissfully ignorant of its own problems.

Savoth is a foresting city, and while they see the Blood Moon every so often, their Scourge incidence is pretty low and they do not fear their forests from which they get their wood. Savoth is a craftsmans city, producing goods so Vint can trade them. Foresters who aren't from small villages are generally from Savoth, and it's a good frontier outpost for adventure. Go here to boast about slain beasts and make boisterous friends in taverns, and to meet people too radical for Vint.

Prince's Spit has masked knights and swashbucklering duels and 2nd-story streets over swamp canals and foreign embassies and parties constantly and lots of romantic intrigue and all in all it's a good place for upper-class drama queens and poets and lower class gossips and rumormongers. Go here if you wanna be fancy and political, but don't want to leave your rapier and history of wrongs at the door like you would in Queen's Coast.

The Canal of The Bog- A line of castles watching over a crumbling canal across the Daylit kingdoms, ruled by lords fair and foul, in a terrain that even the rustic swampfolk admit is a little unpleasant. Feudalism and swamp banjos- come here if you've been reading the feudalism posts at coins and scrolls and want some of that, and/or if you want to go on swamp adventures and roll for diseases and rusty armor all while trying to retrieve a prize pig from probably a witch or something. It's like redneck king Arthur.

Neth- The closest thing to vanilla 'The Nightmares Underneath' style play. Invest in institutions, gain in social class and advance through the 3 walls of wood, stone, and iron to the mountain court of the New Caliph, maybe do light wilderness exploration and town roleplaying, and make most of your money retrieving anchors from nightmare realms and selling them to sketchy dudes while patting yourself on the back for vanquishing a nightmare. Meet weird desert cults, little oasis villages, exotic nomads, but rest assured that so long as the nightmares do not grow unchecked, you can protect the Law from the onslaughts of chaos

Random Villages and Random Beast Islands of the Daylit Kingdoms- Each village has a few interesting NPCs, a few interesting bits of local history, maybe a dungeon, maybe a monster, maybe a cruel overlord, maybe a poisoned well, maybe this, maybe that. Go muck about in the towns and villages if you like 'a stranger comes to town' style plots and exploration without it being a grueling expedition through empty wastes.
Around Vint and Savoth, it's more 'Grimm's Fairy Tales'
Around Saresare it's more 'Arabian Nights'
Naturally the beast islands are more 'gulliver's travels' with a bit of Pirates of The Caribbean , on account of the necessity for boats.

The Moonlands
Wilderness crawling with very few established areas. Charts and random rolls determine what is over the next hilltop, and the ruling forces are Moons and Monsters, not Men. Beware!

It's scary out here. In the daylands, villages are notable if they have a monster nearby. In the moonlands, monsters are everywhere. No one knows what all is out there in the moonlands, because nobody with a lick of sense takes one more step away from their place of safety than they have to. The Moons hang, low and leering, not for hours, but for weeks- Helios isn't coming to chase them off, they only leave when they're good and ready. And without the moons, there are only the stars, and you need a torch to see- and the dim light of Helios chasing off a Moon in the nearby Daylands only does you any good if the moon was vaguely in your direction- you can go to sleep 4 times without seeing even indirect sunlight, some times.

Vint-Savoth- Scourged nobles, twisted and strange, in castles long forgotten by the wars of men. Villages swallowed by the woods, or turned to moon-worship and druidry. Primordial Wolf-Spirits that have never seen a man, and aren't impressed. Foresters too experienced for their own good patrolling a frontier overrun by monsters. And the Blood Moon, never too far away. Come here if you seek darkness and the beast within man, but stay away if you fear the forest.

Wurderlands.
War. Wonder. Murder. Wander. Weirder. Border. Etymology unclear. There are grim fortresses, some still manned by men and guarding villages, others lost to the dark and lying in wait. There are roving barbarians, disciples of Demurge, the cruelest god of man, but still one of men's gods. Those turning foolishly to the gods of the outer dark will find the torments of Demurge soft-handed indeed. The moon of Winter hangs heavy in this realm, and sources of flame are essential. The Worderlands are a vast wilderness of strangeness and pockets of civilization too far apart to be said to be of any united civilization.Come here if you have grown weary of civilized men, their lies and laws, and seek strangeness and solitude, and perhaps if you seek something that can be found nowhere else.

Black Dunes-Though the sand is not actually black, this desert lies in perpetual shadow- the dim light of Helios in Saresare is blocked by the mountains. It is said this is the land of Death, and those seeking death are sure to find it. Come here if you have business in the underworld, otherwise stay away- your time in the lands of shade will come soon enough, mortal.

Legless Jungle- An abominable and otherworldly place known only by the ramblings of madmen and the unlawful depravities of strange cults that claim asociation. Lurid and fleshy fictions of that place are spun by transgressive storytellers, and occasionally strange golden worm-idols are sold in markets, allegedly from that place, but it is beyond the realm of conventional knowledge. If even one in a hundred stories are true, there is no sane reason to go here.

Auroral Reaches-Strange heights indeed, locked behind a frozen sea. These mountains have few clouds, just shimmering lights, and are tall enough to reach the drifting moons, and perhaps the sky beyond, if one is mad and skilled enough to make the climb and leave the realms of Man behind. Come here if you seek audience with the celestial and divine.

Deep Islands- Beast Islands locked in sheets of ice far from the light of helios, or simply dark and treacherous places where luminescent fish are kept in water-filled jars in the absence of oil to burn for light. Those who dare the black sea are brave indeed, but it is not a place without a certain morbid charm, and the islands, dotted like stars, range from monster-haunted spits of rock to thriving whaling towns- though the term is inept, for it is not whales that swim in the black sea. Come here if you have a stalwart crew and a need to find what is not only unmapped, but so far off the edge of the map that you may as well have sailed off the face of the sea.

BEYOND
Old Empire- The emperor being Ice, or Darkness, or the King of Moons, depending on who you ask. The ice was there before, and it will be there after. Perhaps there's something out there, Beyond.
Posted by Wizzzargh at 2:50 PM