Monsters, Mystery, And the Supernatural vs 20 henchmen with crossbows


A player (presumably only half-jokingly) brought up how great and honestly not that expensive it is to hire many mercenary bands to just march in to a dungeon and overwhelm the inhabitants after they did just that, or just stay outside and bombard the place with catapults, or whatever logical strategy having a bunch of troops naturally lends itself to. There's a fun blogpost on this subject here
http://tao-dnd.blogspot.com/2016/02/how-to-tackle-dungeon-i-first-steps.html

This sort of thing is well and good for domain-level play when you settle down from adventuring a bit and send troops to destroy or capture other strongholds of mundane (And even slightly magical) natures. Maybe it's even FAIRLY magical and you have some Age-of-Mythology style play with giants-as-siege weapons or whatever.

However! I'd say this is a failure state of the wondrous if it becomes an effective go-to solution to every threat. If 200 guys with crossbows in a skirmish formation can own a dragon, your fantasy isn't fantasy, it's become realism in a rubber suit. And y'know, realism can be fine if that's what you're after, but you have to ask some hard questions. The big one being 'why are monsters not extinct, with prejudice.' And if you come up with an answer to that, 'why are monsters a big deal if a squad of yahoos with spears can take them down?' The real world had big spiky monsters and you know what? Humans killed and ate them and now their remnants are kept around to entertain children and scientists.

So! If a dungeon is just a bunch of less socially organized humans and like, a pet tiger in a cave, your dungeon should probably have been cleared out like a thousand years ago by superior organized forces. And if you've come up with convoluted reasons for your lame dungeon to not have been dismantled by 20 guys with a bad attitude, (Or hell, even a good simple reason like 'island far from any society') you still probably don't have any answers as to why the players shouldn't be able to hire 20 guys with bad attitude to take it apart, and so either you give the players a strategic victory or you have to talk them back down into senseless genre conventions for the sake of the game. And though it may seem like I'm badmouthing those options, so long as everyone is having fun, it's fine- players who understand and stick to genre options are great, and stomping a lame house-of-cards dungeon with an unorthodox strategy is great too.

But! It's not very fantastical to have the players reduced to troop commanders who exploit quantity over quality, and it usually pretty much invalidates even pretending to care about the rulebook. RIP mythic age of heroes and monsters, hello Advanced Squad Leader.
And if you're playing  a Fantasy Role-Playing game and want to keep the FANTASY part relevant, you can either have players who will intentionally act stupid and gimp themselves for the sake of the genre, OR you make a setting that actually supports the genre and is internally consistent so the players can play smart without metagaming. 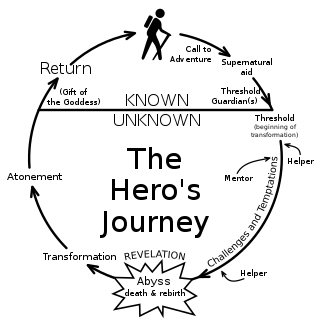 This is the heroes journey which, while not 100% relevant to RPG games due to the unscripted and emergent plot, isn't 100% irrelevant either. I've made a simplified version as related to my ideas about fantasy roleplaying and how to keep it from degenerating into a very modern affair with standardized tactics and the domination of more powerful but ultimately mortal creatures by 20 humans with spears. 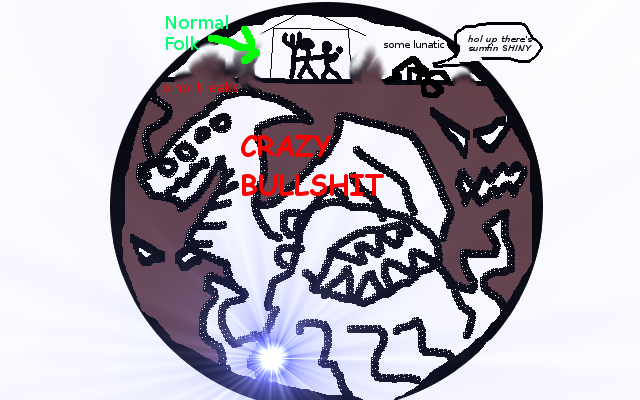 A dungeon full of goblins, hell even a cave with a dragon- that's Known at this point. Werewolves, vampires, you know how to deal with that crap. It's no wonder some players want to establish a basecamp and have a bunch of hirelings do that dirty work for them- it's a known problem with known solutions. Why WOULD they walk into a dank murdercave with 4 guys when they could besiege the place with 20 guys? You can't pull the 'uhhh NPCs are too scared to adventure' if adventuring is basically no different from being a soldier fighting humans and maybe something scary like a helicopter- sorry, 'Dragon' every so often.

So, how to keep the game within the reins of an RPG and not a logistical wargame? Social stuff like 'oh only lords can legally muster troops' and so on only delays or obfuscates the issue

Exhibit A- <Monster> can only be hit by magical weapons.
Demons, golems, elementals, many undead. Don't have a magic weapon? Then you can't fight it really effectively. This effect really got weaksauce in later editions, turning it into 'well it's just 5 damage reduction so if you're a big strong boi with 18 str which of course you are, you can fight it anyway it just takes a while and shouldn't your GM have given you some appropriate wealth by level and magic items to keep things balanced?' and man that was missing the point hard.
The point being that if a monster like that showed up, ANY NUMBER of NPCs are screwed.
You don't need an army, you need an exorcist or a hero. You need someone whose seen the Unknown and got stronger for it. Of course, people like that are a little Unknown themselves and probably aren't trusted. But if the alternative is licking mud off the hooves of Mayor Imp, well, you can probably tolerate some weirdos for a bit.

Saying 'you might die fighting some goblins' is one thing. Saying 'you'll probably go mad from corruption and have your dreams and soul harvested by unknowable darkness as fuel for another blight upon creation if you spend even ONE HOUR in a dungeon' is a whole 'nother can of worms. If you marched 100 men into a nightmare incursion (the dungeons of the game) you're probably going to end up with like 5 more nightmares and like 50 lunatics. Nice job.

The threat of corruption by the 'Other World' or the 'Unknown' is honestly a lot more terrifying than mere death, and it's a venerable trope in both literature (See all those norse heroes corrupted by cursed treasure) and in D&D (spawn-creating undead, baby). If hordes of humans can quickly be twisted into hordes of monsters, well, keeping your group to a tight band of fearless heroes and leaving the henchmen at home starts to make a lot more sense.

Similar concepts get brought up in the Mythic Underworld concept, where the dungeon itself is a liminal space between location and enemy- the dungeon ITSELF is a warped reality trying to kill you, not a safe and known pile of bricks that you can respectably and predictably besiege.

Exhibit C- Dungeons tend to be tight spaces where not more than 1-6 men can fight at one time. If they get matched up against individually superior foes and can't use their numbers, a tagalong army can start looking more like a waste of dice rolls. Also, morale checks and logistics can become a threat worse than the actual whatever it is that made you want an army in the first place.

Anyway. It's good to think about what your setting is meant to be so you can in turn come up with ways to make a setting that supports the verisimilitude of a narrative of exceptional individuals, without relying too much on 'just cuz.' If a lot of problems could be solved by 20 guys with a crossbow, you really need either better problems, or at least better mass-combat rules because everything is gonna come down to numbers and grand strategy, not how much big Bruno The Barbarian's biceps are.
Posted by Wizzzargh at 2:14 AM