OG Doppelgangers
With shapeshifting and ESP being used to mimic humanoids (this said to have 90% accuracy), it's easy to see why doppelgangers are menacing agents of subterfuge and deceit... but what with a number-appearing score of 3d4, turning into party members giving them surprise on a 4-in-6 chance odds (no further mention of potential combat advantage is mentioned, curiously enough) and being statistically equivalent to slightly harder hitting ogres  one might question the reasoning for such creatures to even bother with such trickery at all. As an added bonus, they are immune to Sleep, Charm, and save as 10th level fighters.

Doppelgangers have the stated motive to kill and replace people they morph into. It is unclear whether they then attempt to live the stolen life, or to continue the cycle of murder and transformation- no mention of eating the dead is made, however. They have an apparent social structure (of numbers that suggest family units or some other small groups) high intelligence, and neutral alignment.  I am at a loss to speculate on any potential ecology implied by these facts save for the humanoid transformation being, perhaps, a means to lure maneating dungeon predators into lethal ambushes by appearing more unassuming than they truly are. Of course, one could take the notion that they are monstrous beings of the mythic underworld who need to explanation for the threat they pose or why they are the way they are, but you'd think if they lived only to kill and deceive they'd be Chaotic Evil...

With significantly nerfed damage, number appearing, and ESP abilities (a DC13 roll allowing resistance) these doppelgangers are less terrifying ambush-bludgeoners and more of the spies and deceivers they are suggested to be. Who they might be spying for is left unmentioned (though in addition to common languages of those they mimic, air-language and Giant may be known as well which may imply...something) but as they are mentioned as a potential character race, them being a sort of an highly dispersed  and distrusted minority pigeonholed into being spies seems a sensible outcome of their existence, as compared to the AD&D version. no strong motive to be 'monstrous' is mentioned apart from a tendency to be low empathy and manipulative, which isn't exactly doppelganger exclusive. 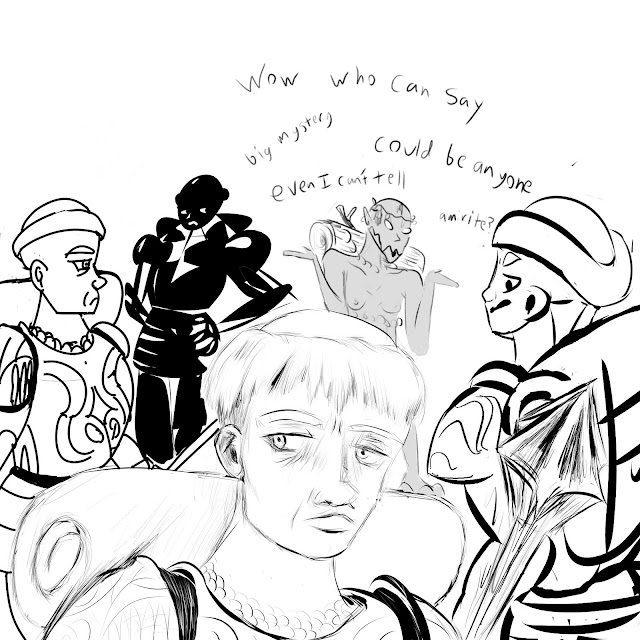 Sunset Realm Doppelgangers
The term doppelganger is terribly overused. A time-displaced self isn't one, nor is a vat-grown clone, nor a parallel reality version of yourself. A shapeshifter(be it mimic, demon, protein polymorph, clever octopus, goblin changeling, or whatever) taking your form isn't a doppelganger. Even your reflection, your double from another trouble, isn't one. (They're a moral lesson about how even if your heart is on the wrong side of the body, it can still be in the right place, or something)


A "doppelganger" is a uncanny double with no good explanation. It is a monster that has no ecology and no place in the waking, sunlit world save for your nightmares. If there is rhyme or reason to its existence, it is what you assume and project onto it. Wracked by self-loathing and despair, perhaps you think it an embodiment of your will to disappear. Trapped by mental and social chains, perhaps you think it an opportunity to leave your life behind. Consumed by regret and guilt, perhaps you think it an ironic punishment, proof that the worst thing in your life was you. You'll never know for certain what it was, and those around you may never know which was which.

Sympathy Puppet- It walks towards you, matching your own advance step for step, blocking the way forward. Strike it, and it strikes you in perfect synchronicity. It is clad in the same gear as you are- hrönir duplicates.  If you fight it, you will both die, bleeding from the same wounds, choking out the same last words. There is a link between you and the thing- If the nemesis falls into a pit, your leg breaks too. If the wizard puts it to sleep with a spell, you slumber too until you are awakened. You can sever the link by getting some distance, breaking line of sight, some dungeon walls between you and it.

It will act independently if sufficiently separated from you, or otherwise prevented its not mimicking you. It will insist it is the 'real' one and act accordingly. It will claim you are a doppelganger that switched places with it with some trickery, if anyone asks. It's not lying. ESP backs up its claims. If it makes it out of the dungeon and you're welcome to play as it. It's not necessarily an enemy, but...

Things can get trickier when you meet an entire party of the things.


Life Taker- You start hearing people talking about things you did, that you didn't do. An imposter! And a damnably good one too- not only is it doing things you were going to do anyway, it's doing things you wanted to do. Things you never told anyone else about. Building that tavern. Kissing the duchess. Beating the duke in a sword duel. Then come the dreams, hard to distinguish from memory and reality. Maybe some of those things were you, after all. The new scars are hard to deny, after all. Maybe it's more of a Jekyll/Hyde thing, and that's why you're tired by day and getting new scars by night. Or just too much carousing ale.

Or maybe this doppelganger can only pretend to be you when it's not near you. A wraithlike thing, a copy that's convincing to people so long as it's not a side by side comparison, that stalks you from a distance, only able to have what parts of your life you aren't around to contest, and every night, it comes to you, to see if its misty hands are strong enough to peel your skin and wring your neck and hide your body. All it needs is for more people to believe in it than in you, and then it will be strong enough to succeed, convincing enough that if anyone hears the struggle in your tent, they'll come to help IT, not you.

Mechanically, it's much like a wraith that that steals a level/hd every time it fulfills one of your dreams or goes adventuring with your buds in your place while you stay nice and safe at home. This is the kind that has no real equipment until it kills you- until then, its rings are painted wood, its sword a tin toy.

Unlived- You return to your hometown and find you never left. You settled down and married the baker, and kiss your family every night. The town doesn't like this adventuring you, who staggered out of the forest reeking of elves and claiming that their neighbor and friend is the real fake and you're totally on the up and up.

You and this life you almost had can't bear the sight of each other. Existential dread aside, the jealousy is eating both of you alive. This baker's spouse has both its hands, because it came back to the village instead of going to the Tomb of the Serpent Kings. You have more gold than the mayor. The baker's spouse is well-liked. You're a local legend with your poise, your stories, your magic. The grass is looking greener on both sides, here. Maybe you can live with the reminder of the life you almost had glaring at you and gripping a bread knife. The Unlived can't. It will try to drive you away, ideally never to return. Framing you for a crime is a good idea. Killing you better still. It'll have the advantage of home turf and connections... Maybe you should deal with this thing first, before it tries something, and certainly before it reveals your... I mean, its true nature upon the unsuspecting townsfolk.

Or maybe you leave. Maybe that's enough for the unlived. Maybe it isn't. Maybe the life unlived dogs your footsteps, waiting for a chance to clean up a loose end threatening its idyllic little nest, not willing to chance that you might come back and do the same to it. Maybe it doesn't, and the thought of it existing just waits in the back of your head, forever.

Face Taker- Or, for a more overt kind of monster, this is the sort of thing that leaps at you from the darkness shrieking and flees in hit-and-run pack tactics, each Face-Taker always against the same person. It's soon revealed what's happening- if one touches your arm, it takes your arm and leaves a nasty grey limb with one less finger behind and runs off to admire its new healthy red-blooded arm for a while in the dark. And you can still feel your arm, attached to some other being, out past the torch light. You can sometimes move it, and sometimes your new arm moves with a mind of its own.

If this continues, you'll end up with each limb and finally your face stolen and swapped. You might get parts that have disease, or mutations, or mutilations (1/6 chance each swap). When your arms are the gross face-taker arms, your strength is 8. Legswap gives you 8 dex. Body swap, 8 con. Face swap, 8 cha. Maybe killing them will make everything go back to normal if your GM is merciful. If not though, there's only one thing to do- catch the monster and force or trick it into touching your head one last time, making it swap the last thing that's yours- the brain. Then you'll be in your own body again, naked, and the face-taker will be back in its foul body, admittedly wearing all your gear but hey, this is the plan B after 'don't get hit.'