OG Centaurs
Centaurs from the AD&D MM feel mostly like 'Fairy Tale' centaurs- sylvan, friendly with elves and gnomes but not humans. Their roving encounters are armed as follows- half being clubbers, 25% being archers, and for the remaining 25% of leaders, light lancers. I suppose this weaponry is all of wooden construction.


As expected of old GG, Gygax notes that you have a 90% chance of being to ransom the women and children (stats for slaughtering them are provided for Anakin wannabes ofc) for the centaur's treasure types of D, I, & T, which is a pretty good haul all things considered- no wonder they don't trust humans and dwarves.


From this one might conclude that the lance-bearing 'leader-types' are the men who have families, explaining why centaur leadership is prone to valuing the women and children above petty trinkets and baubles. That further implies that bravery and combat skill is valued, as 'leader-types' have lances that require charging into battle, so some sort of martial patriarchy seems a likely form of governance. The clubbers are probably men hoping to distinguish themselves in battle with threats to the herd, while the archers might be the low men of the social ladder, as they cannot distinguish themselves in melee with a bow, and are developing a different skillset entirely and so would be unlikely to 'upgrade' to lancers even if they slay many enemies with their bow. I would guess that the task of bow-hunting is necessary but dishonorable, a job assigned to centaurs who are viewed as cowards or slow-hooved.

Sunset Realm Centaurs
When two souls love each other very much, they can create offspring. See below for details

One might wonder how species are even separate at this point, and the two leading theories are

1.  Vanity leads souls to prefer forms that match their own bodies, and speciation is primarily a matter of aesthetic preference.

2. Light is orderly and categorical, so lands lit by light have suns, moons, and gods maintaining reality, whereas in the dark, everything is basically the same. That's why sunlit beings and moonspawn can be sorted into categories, whereas darkspawn are basically just a chaotic mishmash of different things, all unique but also, all alike.


This means that freakish hybrids have a perfectly normal explanation, but it's rare for the will of such disparate souls to align in such a way in the wild. Most lions and hawks will have little contact, so they can't fall for each other, hence griffons are rare (though hybrids breed true with their own hybrids, meaning semi-stable populations can emerge.) Humans and domestic animals have considerably more contact with each other though, so...

Centaurs are what you get when a horse and a human get together, meaning they broadly emerge from lonely farms and noble knights. The former just tends towards sad stories of single parents and youths who never fit in, the latter leads towards scandals and succession crises requiring thrones to be moved into the stables, or vice versa. 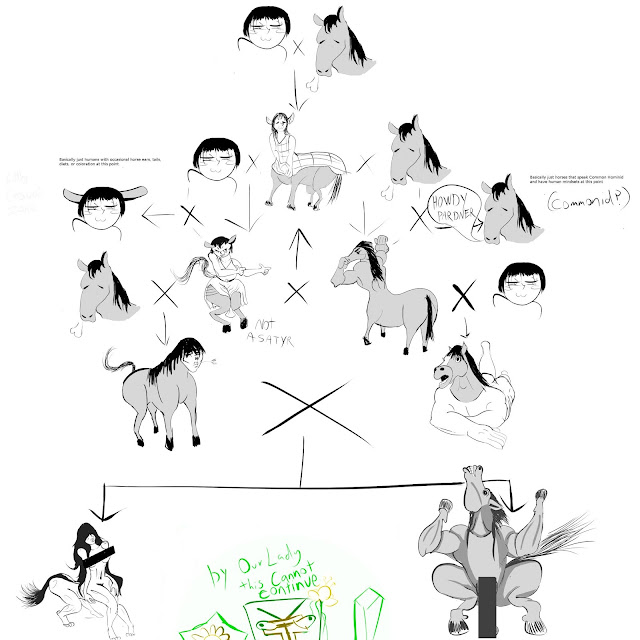 Centaurs are most common in King's Point/Queen's Coast/Prince's Spit, where chivalry trumps common sense, mounted knights are common, and there are several established options for a centaur of noble lineage.

1. They can work to be so charming, diplomatically astute, and full of social grace that they can be accepted into high society as just another noble with a big butt hidden under a hundred pounds of lace dresses. This tends towards repression and self-loathing for ones horsey half, but the castle of the duchess Chira Loquacia, a centaur who won't be shamed and won't be silenced, is built to accommodate these folk and proclaim the validity of being half-horse(though the inevitable matchmaking with other centaurs from the incorrigible duchess may wear one's patience thin).

2. They can become natural-born cavalry knights, clad in armor and purging the land of revolting monsters and peasants. This can lead into #1, or the extermination of monsters for Our Lady of Gardens can earn them enough favor with that stuffy goddess to invoke a miracle. Our Lady of Gardens tends to be fond of the parts of the whole that is the offspring of a noble human and a thoroughbred horse, and centaur champions may be rewarded with transformation into a human, given the ability to change between forms (night and day, typically) or, more rarely, separated into the fraternal twin horse and human their twin-soulled body was 'meant' to have been born as.

3. They can flee to the nearby Wurderlands and find acceptance in Wurdton, where the Lord of Calamities, the deity Murulu, presides over all manner of folk deemed too monstrous of form to fit in elsewhere. This is, of course, a rejection of Our Lady of Gardens and the establishment of human society and is located in the perilous moonlands, so one must be well and truly fed up with society to take this option.


Centaur knights would have their backs snapped if they charged upright holding a lance in their arms, so they either lean way, WAY, forward to take the shock of impact down their spine rather than perpendicular to it (more common with light lances and armor) or have lances mounted on heavy armor so that steel and horse-shoulder takes the hit. These armor-mounted lances are not so much wielded as they are swiveled into attack position

Centaurs can eat anything humans can, and things like hay that humans can't. However, their teeth aren't great for that, so if they're gonna eat hay and oats, they need to mill them into something more easily comestible. Typically it's easier to just eat high-calorie human food than to go whole horse.


Breastfeeding is difficult- baby centaurs are too heavy to be cradled and nursed to human breasts, but too tall to reach horse teats properly. Some combination of kneeling, stepladders, or just milk in a bucket is probably necessary until weaned. Speaking of breasts, shirtless female centaurs seem an unlikely fantasy to be supported unless they are very flat-chested indeed- if humans IRL prefer sports bras when exercising, the galloping and cantering and trotting and so on of a horse would surely be even more unpleasant.


Centaurs as beast of burden is seen as disrespectful(unless they're a peasant centaur in which case they were beasts of burden either way), but centaur knights can find it quite handy to have a squire riding on them to pass them new lances and so on. Typically a centaur-mounted person rides facing backwards, as the centaur needs no one to steer them, and can really appreciate someone watching their back and flank.
Posted by Wizzzargh at 4:15 PM