Kings of The Jungle

The Lion and Tiger are both kings, but they are different sorts of kings.
They can speak to any living being, but rarely deign to do so. How often do you try negotiations with the flesh YOU eat? 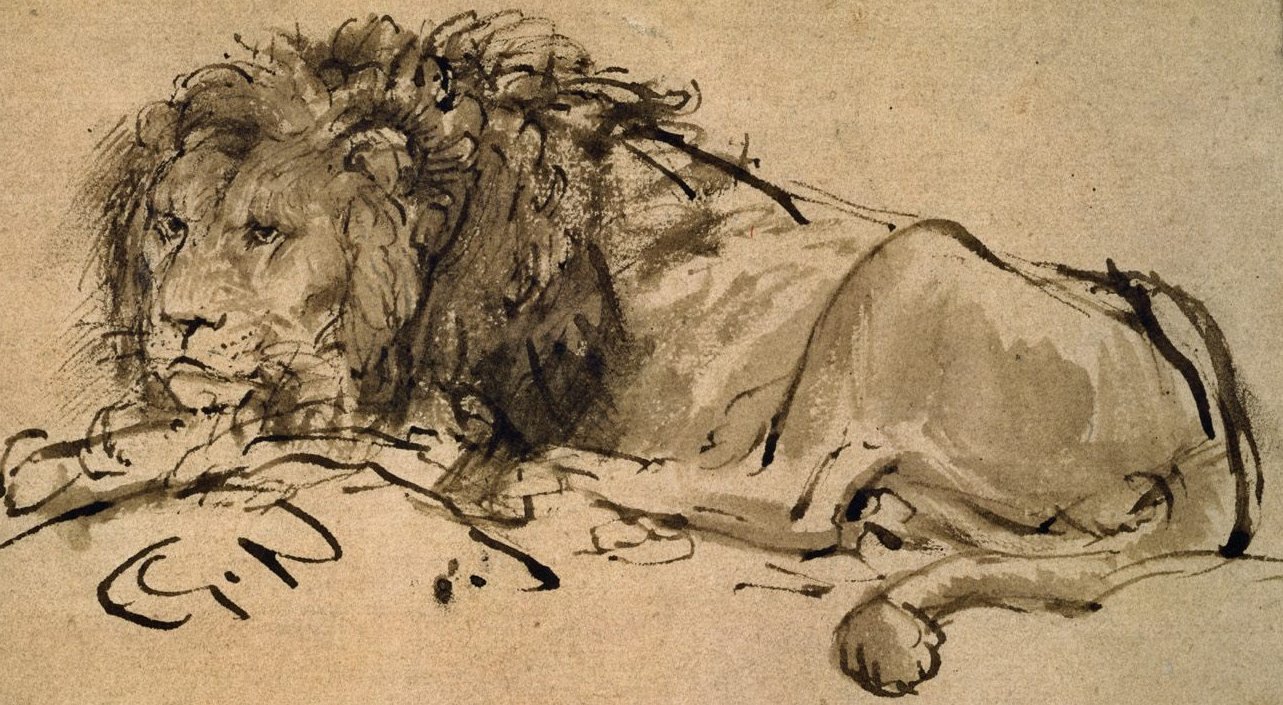 You can challenge lions with manes to duels, and they will accept. Defeat them, and you will become the new leader of the pride. Lose, and you will either be eaten, or enslaved, or the latter first and the former later.

After winning, if you are too in-tune with being a de facto lion, too happy with your killer lionesses, too pleased to devour red meat, then you yourself will become a lion some day. Every time you trust your life to the strength of the pride rather than your human(ish) fellow adventurers, every time you risk your life for the sake of the pride, perhaps by defending your claim against another challenging lion, or choosing to aid a lioness over Patsy the Torchbearer #3. The empty throne of a King of Beasts beckons your soul, and eventually, your soul will realize that it is not just acting like a lion, it is one.

If you are not in-tune enough, too happy to treat your lionesses like tame attack dogs, insistent on cooking your food and eating apart from the pride, then the pride will abandon you eventually, sooner or later. The lionesses will mock you for tolerating other males, and snarl at females(they frequently don't ID which is which correctly, and don't really care). They will eat the pack animals and call you a fool for not doing so yourself, if they even deign to address you. And then they will leave.

This dynamic is not what most people have to worry about. Most people have to worry about being eaten by lions, specifically lionesses.
Lionesses hunt in packs, and the maned lions are not invited on these hunts. They are usually content to slaughter a horse and leave you be, but lions eat a lot of meat. If your group proves easy prey, they will find you again and again, taking you down one at a time, and they do not fear fire or magic, they only respect the danger. They could use such things themselves, if they wanted to (they don't). They are beasts, true, but they can plan and scheme and speak if need be, activating rusty abstract thoughts from disused corners of their minds.

Sometimes lionesses take people alive and bring them to the maned lion. Lions ruled men, long ago, and sometimes they enjoy putting uppity humans back in their place and showing them how useless they are when stripped of their tools and social structures. They will not ransom prisoners, or negotiate hostage exchanges. If someone is taken, you have to take them back, and the lions will oppose you with unflinching violence. That word, Pride. Did you think it was chosen by coincidence?


So, there you have it. Lions are the Lawful kings of the jungle. What then, of 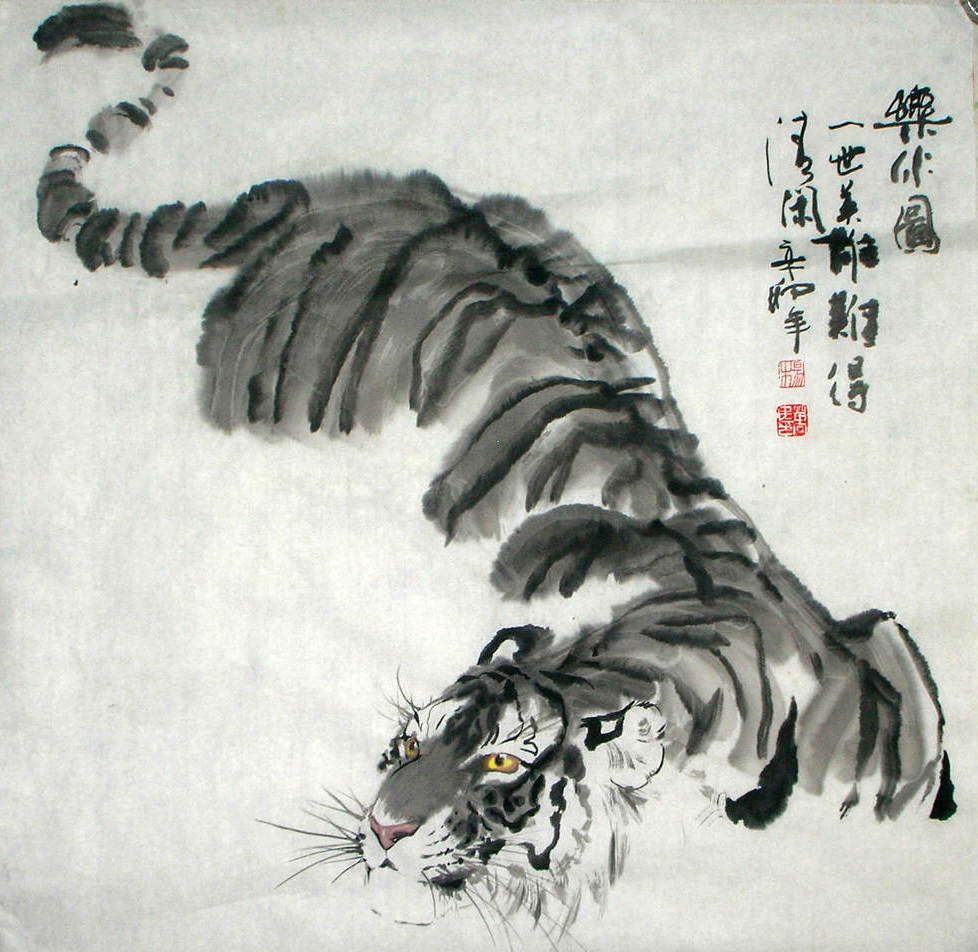 The Lion is, ultimately, no longer king. Once unquestioned royalty, now less so, lawfully diminished and jealous of the dominance of uppity apes with spears and domestic animals. Tiger is a tyrant-king, usurper of thrones, that which spat in the eye of the sun. Tiger is the Chaotic King of the Jungle, King not because any serve Tiger, but because Tiger takes what Tiger wants and none have the power to say otherwise. Every tiger has two names, but they will not tell you either. Every tiger has a history as a housecat, a cat so cunning, ruthless, and iron-nerved that it killed 100 dogs, upsetting the natural order and becoming a Tiger. Everything a Lion has is inherited from their royal bloodline. Everything a Tiger has was earned. Tigers think often on how superior they are to Lions, but Lions rarely think of Tigers at all.

Tigers work alone. They prefer to strike from ambush, slaying in a single surprise round. They flee what they cannot kill, and prefer to kill humans. Tigers are not beasts, they are monsters. It is unclear whether the transformation from cat to tiger made them monsters, or if all cats are monsters to begin with. Tigers may speak with you if it amuses them to do so, or if they think it will give them advantage- unlike lions, they have no pride, and so nothing they do demeans them, and so there is nothing they cannot do.

Tigers swim, tigers climb, tigers sneak. Lions can see at night, but prefer to sleep through it. Tigers are the night. Their black stripes are marks of darkness and chaos, and their function as camouflage is incidental. 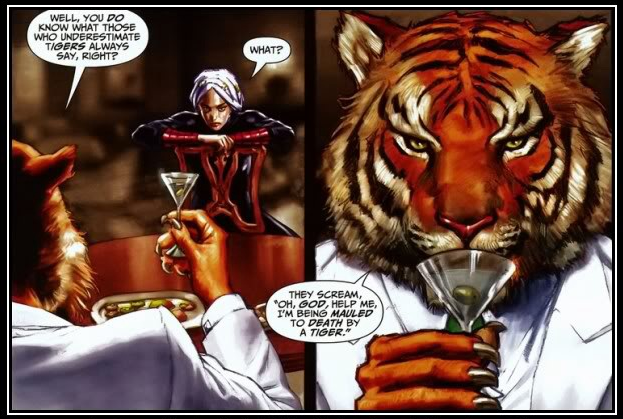 Cat-Lords, RakshashaTigers that eat 100 men violate the natural order still further. They can look like men, or tigers, or both at once. Mortal magic and steel cannot touch them, as mortals are yet bound to the natural order, and a Cat-Lord is not. A blessed crossbow bolt kills them instantly, a perfect, inexplicable confluence of the fading dominance of sunlit gods and torchlit civilization over these feline nightmares. They pick up the workings of magic easily, the chaos of their stripes now reaching their souls and letting them warp reality. Think of it as thusly- when a mortal shapes their hands just so, they might create a shadow vaguely resembling a duck or rabbit. When a Rakshasha shapes their hands just so, they create a duck entire.

Some cats are content to merely become tigers. Any cat mad enough to to become a Rakshasha will not stop. A Rakshasha's next goal is to devour 100 gods. What it will become should it succeed, none can say, for Dogs send champions to slay the beasts at any cost, a much delayed revenge for the prior slaughter of 100 of their brethren.
Posted by Wizzzargh at 2:13 PM

Email ThisBlogThis!Share to TwitterShare to FacebookShare to Pinterest
Labels: Monsters