Simurk, The Pits of Iron Dust

Simurk is a town through some mountains, in a desert. It links to various interesting places, but isn't really a 'frontier' town. Dusty donkeys carrying buckets of slag and rock are driven here and there, and the winds blow dust from the mines everywhere.

They have big open strip mines with descending layers that get darker and weirder as you descend because of course they do. Simurk has been digging for a very, very long time.

The most prominent pit is huge. A village could be dropped down it, and that's exactly what the people of Simurk did.  The first two layers are farmland- protected from the winds of the desert by ducking below them, and fueled by animal dung and terrible, terrible soil in which very hardy plants eke out a living. These farms do not feed Simurk, they only flavor imported foods. Bitter spices and ornamental desert flowers are all that can survive on the levels of the mines. 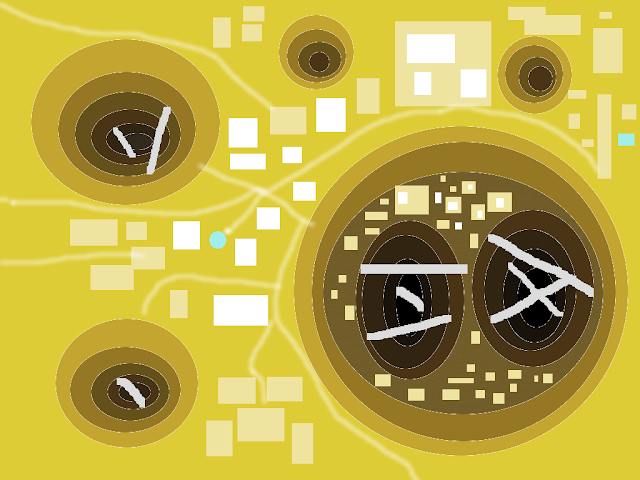 The third layer is Lower Simurk. Contrary to what you may think, this is the richest and most fashionable district- nobility and merchant princes of Simurk are happy to live here- they are close to the riches of the earth, there is plenty of shade from the glaring sun, and roving bandits and monsters from the desert typically just bully the lower-class citizens who live above ground rather than descend into the pit.

Then, there are TWO pits within this pit, descending 4 more layers. Why are there two pits?
Most pits have at least one bridge every two layers or so. They are as wide as a street and frequently have
Lesser bridges of rattling wooden planks are less common, as it's hard to push a mine cart across such a bridge, but these rickety suspension bridges do exist in  the lesser pits but have far fewer  ancillary characters lurking about.
As for products and plothooks and people of Simurk (presented in ghastly organization for your displeasure) 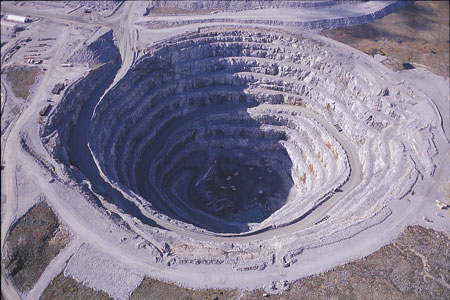 SO WHAT'S WRONG WITH THIS TUNNEL(1d6, +1 per depth)
REAL BAD THINGS (That aren't mega monsters. I wrote up like 3 and decided they were terrible. I don't think this is much of an improvement)

WHAT ELSE CAN YOU DO WITH SIMURK
One thing you could do is ruin it. Turn it into a sprawling megadungeon infested with monsters that it's terribly easy to descend deeper into. You could half-ruin it and make it a warzone between dead from the crypts and the remaining living cowering in their houses. Or between an invading army on the surface and the curious defensive position of the Simurks being literally 'holed up.' Or between an awoken dragon from the depths, coiling and huge.

You can change the theme from sand and mines to flowing waterfalls and elegant trees in a network of sinkholes, or make it a sulfurous caldera of geysers and hot springs. You could have Simurk be in contact with underground civilizations from the veins of the earth.

You can sell the players a giant hole in the ground and see what they do with it and then shout 'No, [playername], you ARE the dungeonmaster' at some point.