The GLOG wizard campaign/playtest has concluded, or rather, I burnt out on it due to, as one player put it, "There was hecka Standford Prison Experiment level of Role Acquisition with our player base". Even so, a lot of valuable information was gleaned from the ~14 weeks and ~42 sessions I ran for the three sub-groups. I've roughly updated the original document post to reflect those design changes.

The general principle was a wizard college, recently burned by sea raiders, was being restarted, run by the Headmaster Great Doctor Ogudugu/Dread Sorcerer Ugudugo in a Jekyll/Hyde scenario that a past campaign engineered. The players were set to defeat 5 wicked wizards terrorizing the land, recover lost secrets, and train students in WIZARDRY, and they accomplished about half the tasks set before them, as the campaign ended about half-way through the year time limit. The players were split into several groups, which were roughly the goody two shoes, mustache twirling villains, and morally ambiguous middle ground. This immediately led to us vs them mentalities developing. I think future 'same campaign, multiple groups' will have to be clearer about it not being a matter of 'sides' so much as 'manageable player group size' if the groups are occupying the same fictional space and thus prone to interacting, directly or otherwise.

Class wise, the group consisted of a
Cauliflowomancer (custom by player)
Alchemist (custom by player)
Hellknight
Many Wizards
Telemancer (Two of them, though due to shenanigans only one really used the base spells)
Somnambulist
Fey Wizard
Toxinist (Dropped campaign early)
Relic Seeker
Geometer
Lenguamancer 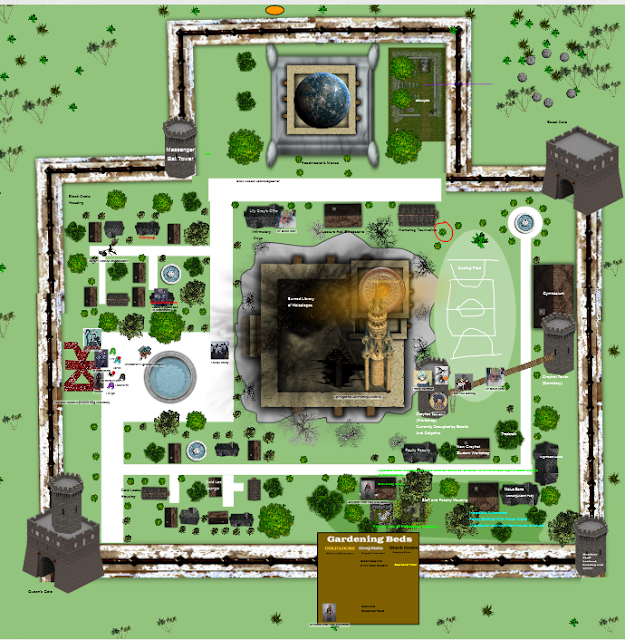 The players engaged in a fair bit of ridiculous wizard shenanigans including, but not limited to
-Accidentally causing triple tsunamis with meteors, wiping out a magic sandcastle and putting coastal settlements into crisis for weeks
-Creating a Pig Cult and awakening pigs to citizen status
-infested campus with, at various times- boreholes, clay pigs, frost imps, mimics, intelligent trees
-Reawakened a volcano
-Hastily cooled the lava off with storms of soapy water
-Turned a pirate wizard captain away from evil via the use of jekyll/hyde potions
-Set up a secret teleport circle to the mainland
-Hired two Ogre Magi onto the payroll so they'd stop eating people

Some thoughts that emerged in play, in no particular order. There are many small changes (like mutation for 1 day instead of 1d6 rounds) that have been retroactively implemented into the prior 'tl;dr' post, as I hope to spare anyone using those rules some of the troubles that afflicted my campaign.

-Spellbreeding procedures are fun, moreso than typical spell research rules. Slapping some extra limitations on how often they can be used should mostly solve the prime problem I encountered where 'sit in tower and do spell research' was more rewarding than actually adventuring.

-GLOG classes, more specifically spell lists, seem to be very self contained, without an implicit understanding of learning new spells. While that's fine especially for shorter-lived campaigns, I think a lot of gaps between 'AD&D spellcaster progression along 20 levels' and 'GLOG caster progressing along 4 levels' exist and may need filling.

-GLOG spells that depart from the lowly realms of [sum]=damage formula and attempt to emulate spells in the level 3+ range may need additional limitations even beyond that of 'but what if you roll a doom.'  Prime offenders are summoning spells, transformation spells, 'death' spells, teleports, and many things with permanent effects. One design flaw I exposed with certain spells was similar to the issues I had in Esoteric Enterprises- if short term resources (MD) can be used to solve intended long term consequences (mutilation, mutations, curses, death, etc) and the only limitation upon those spells is the threat of more long term consequences, the long term effects become nothing but pointless busywork that eats up a day of MD at worst, and the intended limiter of the spell becomes irrelevant.

-Material components must be quested for, not bought, or town becomes a more important locale than the parts of the game where adventuresome things happen. While sending known mercenaries or retainers on quests to retrieve goods could be fine, allowing the sort of impersonal transaction of magical goods for mere coin turns things in a "Industrial Magic Revolution" direction pretty quick once you ask 'why aren't NPCs doing this too.'
Powerful spells that burn through ingredients, then will require more questing or shenanigans to acquire more of, is one such limitation upon glog spells.

-Gold Costs for 'lesser' components is potentially fine when it's just a kind of abstract purchase for baseline functionality of something, like crushed pearls or gold-dust infused ink. The sort of thing that makes magical efforts expensive and unable to be infinitely replicated by say, a printing press, and attaches to coin for xp economies easily. Small gold prices for certain spells can limit them effectively when they can pretty much always be cast in session, but cannot be cast every day for a month with your spare MD to bring about some effect without incurring financial problems.

-Limiting casts of a spell to be within a certain time frame (the main example being a teleport that could only be cast once every 24-[sum] hours) helps encourage single large casts rather than smaller 'spam' approaches that bypass miscast/dooms/mildly inefficient MD use. This is to some degree just reinventing the wheel of classic Vancian D&D casting though.

-Minimum MD investiture- When used as a 'you might get a doom' drawback, this may become a toothless warning if players avert their doom or treat their character as a pawn rather than a character.
I think it becomes more interesting if the MD investiture is not merely a 'doom' threat but a 'how do I get to 6MD' problem. If nothing else, requiring a minimum MD investment means it eats up more MD than usual.

That's most of my thoughts on my deep dive into a GLOG style magic system this campaign. All in all I'm not sure I've made a proper bridge between 'you get some random spells from your glog class and level 4 is the cap' and the level-based power scaling of an AD&Desque wizard.
But such a bridge is worth building I think, because while GLOG casting is cool, it doesn't match well with certain monstrous bestiaries math-wise or long term campaign stability if every level 4 wizard gets to break reality and then die of a doom.

-While it is certainly possible to run three days a week, it is less plausible to be able to keep abreast of required prep for three groups in the same world if they stray from existing prep and goals and truly start to turn into 'three separate campaigns.' So being more clear whether campaigns are more ordered railroads or sandboxes is something I'll communicate more.

-While considerably more work, I think the central megadungeon of a campaign requires more careful level design than what most online generators are capable of. Filling a Donjon-generated dungeon with appropriate fills doesn't solve the general weirdness of the layout, so there's not a lot of rhyme or reason when it comes to exploration, nor are there things like 'giant bridged chasm spanning 3 layers.'

-I forgot to include weather mishaps, which led to players marching through rain like soulless automata. Adding things like slipping and falling (annoying in plains, deadly in mountains), inventory items(like spellbooks) becoming moldy from leaks and soaks, frostbite, avalanches, and so on  are important.

-Milestones have decent potential for non XP based advancement I think, but I think they have to be tweaked for each campaign. I was kicking myself for not including the campaigns 'story goals' as milestones and instead using a more generic list- that would have helped keep things focused.

Posted by Wizzzargh at 2:41 PM