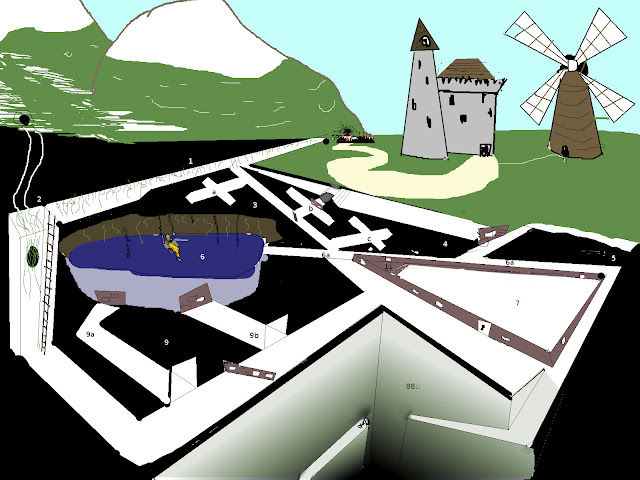 The Surface- a an obscure but impressive stone abbey lies near forested mountains. It is inhabited by clergy of a deeply religious nature.They do not speak, but have evocative gestures and if pressed, will write monosyllabic responses on slate chalkboards they wear around their necks and get visibly annoyed if they have to do this more than once per conversation. Out to lynch the man in the mines. Will hire mercenaries to take over if the players don't step up, but the mercenaries and monks are content to wait outside rather than risk the beast-haunted mine.

The situation- The head of a recently joined and recently deceased young nun, Goldie, has been stolen by a foreign musketeer. He was discovered halfway through, and fled with his prize into an abandoned and overgrown mine. The monks may show the headless body, and will make little effort to correct the obvious misunderstandings, though actual cause of death was a dagger to the heart, a suicide. Offer the magnificent steed of the musketeer(its stolen from a powerful lord actually, see the fiance mentioned in 6) as payment, and warn of wild beasts(a grimace with teeth bared and hands curled into claws, crouching down) and toxic gas within the mine (holding one's nose, then clutching one's throat)

Random Encounters (but not really)
1-Echoes of Noise like groaning chains, from 6
2-Wild Dogs, or just echoes of their barking if they haven't come to investigate
3-Foul smell preceding gust of bad air that will choke torches and men alike.
4-Collapse- only applicable if the players were mining or making a loud noise
5-Bat swarm flying confusedly about (night only)
6- Impatient but low-morale monks

1- The Overgrown Main Tunnel- roots from the forest above choke this tunnel, forcing one to chop through or proceed on all fours. Hidden by roots are side passages to 3 and 4.

2-Deep Shaft of black, sharp stone with ladder and one side covered in roots. Ladder is rotten and may break if climbed, roots are fragile and likewise, and ropes may be cut by the sharp stones if used to descend. It's perilous. Hidden behind the roots is an entrance to an old lava tube that leads to a bear cave in the mountains, where a huge bear slumbers.

3- Tunnel with sagging roof of earth, nearly collapsed. There are 3 sidepassages that lead to crossroads of mining.
a- root-choked walls are damp and strange creaking can be heard. One wall is thin enough to be broken through to 6 without much effort, though shovels and pickaxes are a must.
b- a support beam is all that prevents the middle of the tunnel 3 from collapsing. One must edge very carefully past this support beam (bonus if you take off packs and armor) as bumping it slightly will bring down the roof.
As for the actual intersection, there is a suspicious brick wall about the size of a door in contrast to the other paths of the T intersection.
Busting through the brick wall leads to a secret passage to the crypts of the Abbey, where the dead nun's body is kept. The passage itself comes out from the tomb of a past Abbot, though the tomb is empty.
c-another intersection. Walls are thin enough to break into 4.

4- Passage in reasonably good condition. Inexplicable steps ascending, then descending once the passage is clear of the secret tunnel in 3b. Ends in a thin, fragile brick wall that leads to the wild dog lair in 5 and the halls around 7.

5- Wild dogs have a den out in the fields dug in the side of a dry streambed, and it links to the mines. They view all the mines as being inside their den, so are more aggressive and territorial than one might expect. They only enter the mines if they hear loud noises like gunshots, collapses, or screaming.

6- A olive skinned man, Antonio, with hair like straw swings on a platform suspended by two chains over a chamber half-filled with water, with more chains and roots dangling from the ceiling, which could be brachiated across. He carries a rifle (or a crossbow if you don't have guns), a good two dozen shots, and is very skilled at swiftly reloading it. He also carries the severed head of Goldie(her hair is like molten gold and reaches the water which he hangs 4 feet above), and will shoot at lights he sees down the 6a hallway. He carries no light himself, and is suspended over the water a good 30 feet from shore, so reaching him or shooting back can be hard.


He claims to be the nun's lover who was thought dead at war, and furthermore that she never shared a faith with the monks and fled to the abbey to escape an arranged marriage. He is out for bloody revenge against her once fiance, who he blames for her death(though he blames the clergy of the abbey as well), and wishes to take her embalmed head across the sea back to her homeland for burial, a typical practice among his people. He has a platinum coin which he will offer as a bribe and claims to know how to break into the fiance's house for more ill-gotten loot like coins and fine horses.

He is irrationally protective of his lovers head and would die before parting with it.

There are 2 brick seals and a key at the bottom of this 10'deep pool, the key opening the secret chest in 11. Draining the water makes the key easy to find.

7-Locked rec room- where the miners of old would play dice and relax. Many old lanterns with no oil, pickaxes, shovels, buckets, and tables are rusting and rotting here. One corner is blocked off by a thin brick wall, behind which is 11.

8B- A sinkhole that the surface has not fallen into yet. Awful fumes of hundreds of years of guano rise from the depths, and bat swarms flitter about. The ramp built into the side has collapsed near the corner, and there is a corpse with the key to 11's chest lying on the far end.

The awful stench and fumes make flame gutter and sputter, and the bottom of the giant pit is meters deep in guano that swarms with flesheating insects (though not the sort that are a threat to live humans)


9- the three dams-two halls lead to water-leaking brick walls that keep the water in 6 held back. If broken, the water flows into 8b if possible, or will simply fill up the pit in 2 about 1/4 of the way if only dam 9a is broken.

11- The secret chamber where the iron strongbox lies, along with a list of names and who gets what share of the embezzled gold nuggets (4000GP worth). Clearly something went wrong, given the disparate key locations and abandonment of the mine...


Possible magical Complications that I left out because I wrote this for a nonmagical intro adventure contest by James Raggi but then forgot to submit it and then decided to salvage my halfassed notes for a blogpost.

The Abbot is a vampire who is exceedingly choosy about creating new spawn, and Goldie killed herself rather than become a vampire. Now the Abbot wants to retrieve the head, sew it back on, and revive Goldie via dark vampiric ichors

The bear is actually the 'missing abbot' from the secret tomb, who faked his own death and went to live as a mad druidic hermit for decades.

Goldie's head is alive and chatty for whatever reason. Maybe she's a dullahan and the clergy tried killing her when they discovered her heretical fey nature, maybe her fiance was a necromancer and can't die until she's properly married to him or maybe Antonio's the necromancer and he can't let go.

The bat-pit of 8b leads to a sinister poisonous lair of some dragon or other foul subterranean menace.

Design Goals- Secret walls that foreshadow later secrets, and also may encourage players to hack through thin walls on their own to bypass obstacles. Simple problem solving and monsters and social encounters that can be straightforward or complicated depending on how much the players engage. Meant to be an intro dungeon that can be finished in a single session, but has hooks to keep going from there. 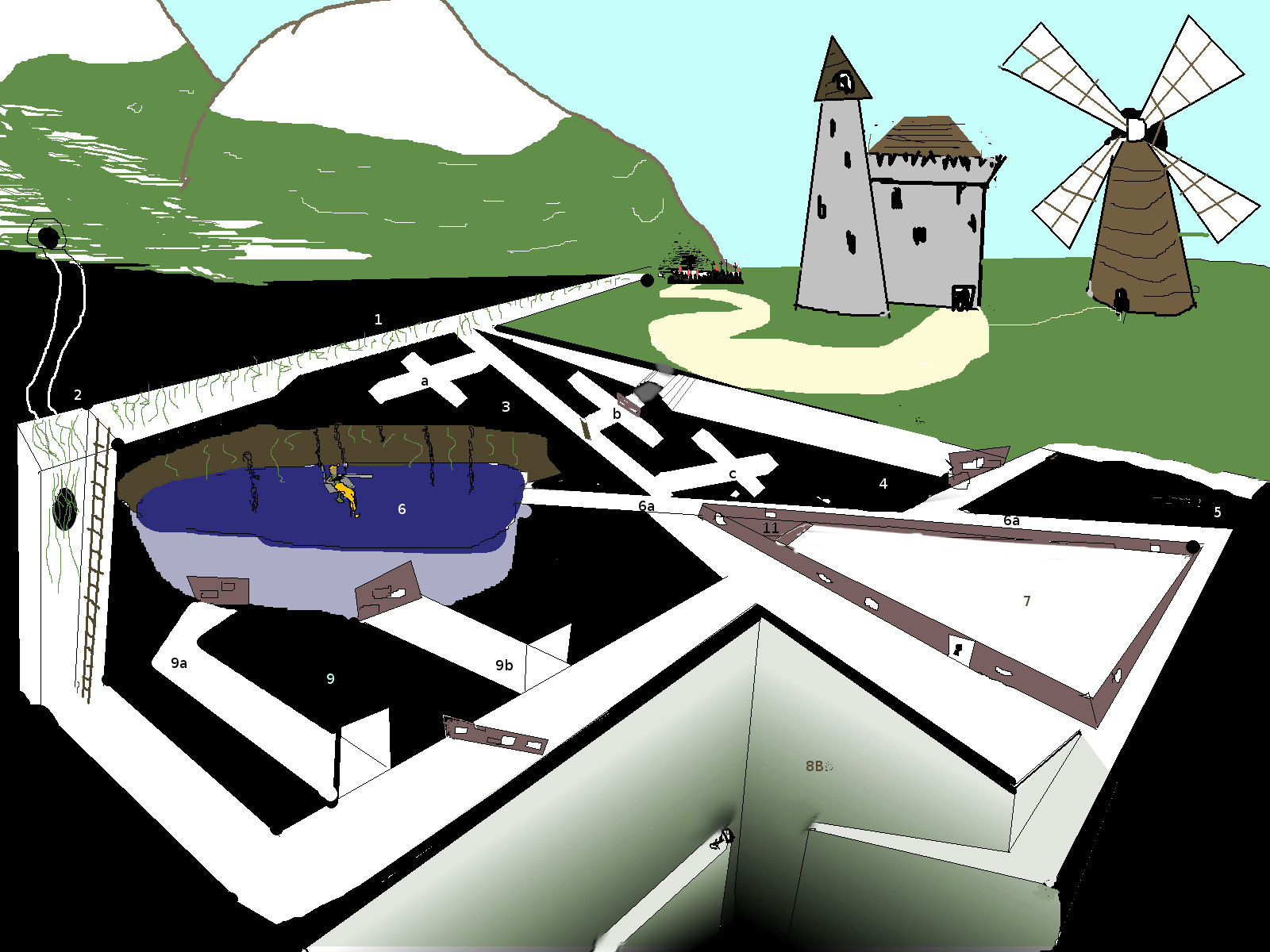 Posted by Wizzzargh at 3:28 PM