More than 3 people have been viewing my blog lately so it's time to scare them all off with some thoughts on Nechronica, which I finally played a 1-shot of with some strangers on the internet recently.

-lesbian cyborg zombie girls-
-who are forced into horrible traumatizing no-happy-ending situations until everyone is an emotional and physical wreck. And it is usually meant to be condensed into intense one-shots so there's no brakes on the misery train.

The fatalism and masochism embraced by the system definitely has some parallels in OSR style play.  You get to have power fantasies and do cool things, but you also must be able to laugh and carry on when Bill the Fighter falls into a bottomless pit trap and dies while carrying all the loot. Where Nechronica differs most prominently from typical fantasy games is how it aims to evoke emotions of despair, sadness, anxiety, but also determination, loyalty, bittersweet melancholy and hope if you're lucky. The core of this game is the explicit emotional vulnerability of the characters, and that's weird to people used to the feedback loop of adventure into treasure into power into greater adventure. Most gamers are comfortable with the latter, but those truly interested in the former are a niche audience. (By which I really mean it's 2DEEP for all you UNCOUTH PHILISTINES, so get off my lawnblog)

Anyway, that's just the fluffy introduction. What I'm really here to wax windbag about is how the combat system is fantastic and I totally should have stolen bits of it for the Nightmare Glog 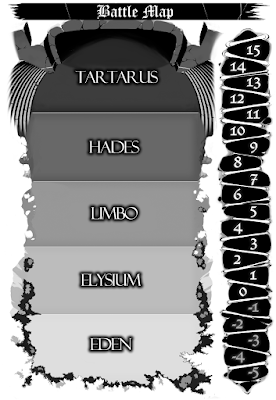 So you have Parts, like Chainsaw Arm or whatever, and you have Action Points. Doing a Move decreases your Action Points by an amount, and once you are at 0 Action Points or less, that's it for you until it goes into the next round. You just slide your appropriate token down that track there and don't go again until everyone higher on the action track does something. It's a great way to track initiative that is both dynamic and gameable, and lets you really differentiate between 'big slow thing' like casting spells or a giant's club and 'small quick thing' like a dagger slash or palming the cursed idol or whatever, by assigning different AP scores to different actions. Normally I find initiative a real pain in the ass to track, especially with online text games where call and response rolling for initiative can add like, a minute to each round of combat, so I generally don't use it, but something like this wouldn't be bad at all. It would be easy to port over to other systems and could potentially keep players engaged more as they see their action count coming up, checking when the next enemy action will be, perhaps changing their tactics to save enough AP to fling a dagger at that enemy wizard if he starts casting, that kinda thing.

Also, combat takes place in a very tactical, but abstract theatre-of-the-mind style battle map. The players chose whether their character initially deploys in Eden, Elysium, or Limbo, and you can pretty much describe these locations as 'Back of the marching order, in the middle, front line' in terms of what sort of character goes where. Hades is 'enemy territory' and Tartarus is deep behind enemy lines, and are essentially the enemy equivalent of their Elysium and Eden. These scale based on the battlefield- the fight I did was a single hallway, Eden being 'our' end and Tartarus being 'the far end' which eventually became a flaming ruin but I digress. It could have just have easily been like, Eden was a skyscraper the players occupy, Limbo the street below, and Tartarus the sniper-occupied skyscraper across the street. Movement and range become intuitive and easy but not totally mushy and handwaved, and it doesn't require tracking dozens of 5 foot squares and just how many feet can Bill sprint in 6 seconds and what's the facing of every goblin on the map! The fear of being separated, surrounded, etc was tangible despite the map being abstract and the difficulty of pushing through enemy-occupied territory was conveyed via the 3AP cost of movement rather than a bunch of conditional 'attacks of opportunity' and restrictions on when you can move and attack and such. It also makes escape interesting- You escape through Tartarus, so choosing to escape gives the enemy some opportunities to attack you and having someone to 'hold the line' while the others traverse the battlefield and-

Actually in the course of writing that sentence I changed my mind. For your meatgrinder OSR D&Dish campaigns escape should be easy, because while a Nechronica character can have nearly every part of her body except the head (and maybe even that) exploded by a RPG(Rocket Propelled Grenade rather than Role Playing Game, for once) and be fine so long as she can scavenge replacement parts, D&D characters aren't nigh-immortal cyberzombies and need to be able to easily choose to run away to fight another day, lest they succumb to the weary mindtrap of believing they must fight everything because they will be 'punished' for running away. So let Bill the Fighter escape easily (most) of the time!

Speaking of punishment, in Nechronica, you have no HP, just parts that can be broken by damage. If you're familiar with the popular OSR concept of getting maimed upon taking damage past 0HP, it's like every attack does that. This makes taking damage interesting, as it necessitates changing tactics- if your Chainsaw Arm is broken, maybe you need to run away so you can use your Flamethrower from a safe distance- but what if your legs are broken? I'm always a little disappointed when, in a desperate battle, D&D characters pretty much do the same thing throughout, because hey, it's their best option. And you don't wanna take away their best option if the only difference between their best attack and their backup dagger is an extra 15% chance of 'nothing happens.'

Moral of the story is to let the players roll unusual ideas not with penalties, and perhaps even with bonuses, and to make unusual ideas as effective or moreso than depleting HP, because that advances combat, it advances conflict, it keeps thing rolling, it encourages acting as though the environment is present and not a 2d backdrop to two HP blobs slapping each other for HP points. To call back to The Nightmares Underneath, one thing I liked is how if you didn't roll quite well enough to disarm someone or push them into lava or whatever, they at least take a regular HP depleting hit representing how you NEARLY got em and have kept up the pressure of conflict rather than just wasted a turn for daring to step out of the accepted 'roll to attack' mode. I think.

No wait, I think the moral was that I really liked action points as initiative and move differentiation. And also I liked the rules for supporting allies, hindering enemies, and creating critical hits and misses rather than insisting only 'natural' rolls count as such encouraged a lot more teamwork and camaraderie, which was nice and that could be a lesson to help encourage more cooperation in D20 systems. One thing I have noticed is that mechanically, D&Dish characters do not have a lot of mechanical encouragement to say 'my action will be aiding the action of my buddy' or stuff like 'lets go back to back!' or 'Stick next to me, I'll protect you' but seem to follow an approach where each character is mechanically an island, beset by foes but having precious little to encourage the players to rely on each other beyond 'focus our independent actions to eliminate opposition more efficiently.' Buff spells and healing are what immediately come to mind, and those that do come to mind seem to be more of a 'okay you got your heal/Bull's Might, now leave me alone so we may all resume doing our solitary island actions in this sea of monsters and trap doors and so on.'

Maybe D&D 4e had some good ideas on knitting the party together mechanically? Maybe I'm just spouting complete nonsense because it's 4AM again. But mechanics influence tone. But I've never even seen a 4e rulebook, so where exactly do I even hope to take this line of thought?