Finally, the true fortress of the Undermen, where the Underking dwells! There's a ton o' weird single encounters here, so I'll be combining a few.

There are 5 main encounter areas here- Over The Wall, The Underking's Keep, the Cathedral of Bloodiest Gold, The Garden of Corpsetakers, and the Road of the Wyrm. 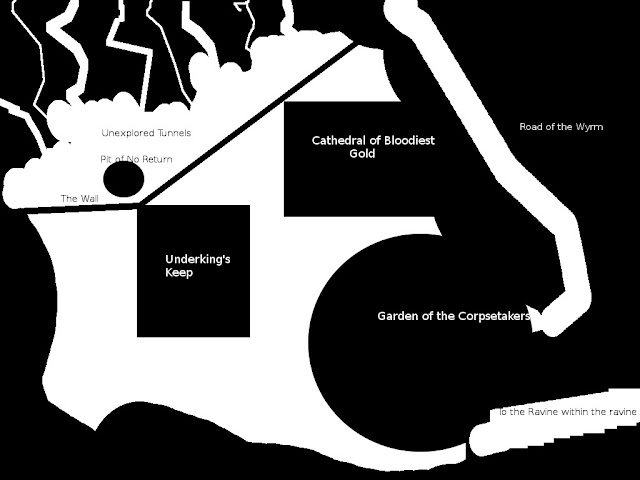 If the players arrived via K3 of the above level, they enter
The Keep of the Underking. Here, the most elite of his warriors dwell, and as such I'm combining the dire bear, Invisible stalker, drider, weretigers, 5th level fighter ghost, Hill Giant, manticores, 4th level ogre barbarian, d3+1 Jann, 5th level hobgob fighter and 5th level gob thief and 1d3+1 minotaurs into The Elite Guard.

The Elite Guard are level 4 warriors who bristle with swords and crossbow and heavy armor, and they show up in groups of 2d4. Each squad is led by a 6HD warrior with a gimmick. Squads are well organized, numerous, and will seek to gang up on the PCs and destroy them.

1- Stealth- Black platemail, limited light sources, snipe from the darkness. Thief abilities.
2-Berserkers- They will never lose morale and won't die at 0HP until they fail a save
3-Deathless- So long as the Underking is alive, this squad of warrior ghosts will rise eternally.
4-Parasitized- They have Itava parasites that limit their strength but add horrible acid spraying to their bag of tricks. They moonlight as apprentice corpsetakers.
5-Golden- Worshippers of the God of Bloodiest Gold, they have max HP.
6-2 leaders, an illusionist and one with a Jann in a bottle. These are indeed the same fellows from the ravine, so if they've been killed they wont show up. Incidentally, Undermen grow weaker the closer they are to the surface, so they will indeed be tougher down herethen they were on level 4.
7- See Slaad

The Underking- He is quite displeased at his recent runaway daughter. He isn't a weenie and has 4hd, but rules via politics and charisma, not brute force or combat-ready magical powers. As a bodyguard/advisor/consort, he is accompanied by a succubus who looks a bit like the princess (because she's the the princess's mother, as it so happens, though the princess is so far disappointingly lacking in demonic powers). She will fly away with the Underking if they are threatened and can get to an exit (but note the keep has no windows, only ventilation shafts and chimneys) and can transform into a flaming skeletal tiger monster if she is forced into straight up combat (I figure combining the advised succubus and hellcat encounter is good enough). The king will attempt to parley for his life if cornered but is a proud man.

The Treasury Vault- packed with gold and interesting magic knick knacks. Situated next to the dungeon. The king has the key.

The Garden of the Corpsetakers. They farm mushrooms and skullmoths alike. Apprentice corpsetakers are just 2HD undermen armed with knives, but master corpsetakers have itava parasites to spray acid at their foes and provide an extra threat if the host is slain before the Itava.


The Flesh Golem/Hillgiant- Corpses sewn together into a horrible giant, the corpsetakers wanted to see if they could reanimate something like this with skullgrub larvae. They could, and now there are several twisted abominations of haphazardly stitched flesh roaming the garden. The high numbers of skullgrubs have rendered them far tougher than the weak zombies that result from a single corpse's worth of skullgrub infestation.

Itava Hydra- The natural guardians of such a well developed Skullmoth lair, these are the final forms of Master Corpsetakers who manage to attach 5 Itava and survive. They do not leave the Garden, and freed Master Corpsetakers are unlikely to be grateful.

Hidden at the back of the Garden is the path up to the ravine, and also the Road of Wyrms. Dragon corpses are the best thing the corpsetakers have found for inducing Itava metamorphosis, and the Road of Wyrms provides a steady trickle of deep-earth dwelling dragons drawn to the smell of the Underking's gold.

The other place the players might enter from is via the unmapped flux state cave system, in which case they will find
The Wall manned by the Elite Guard that blocks off the hideous monsters of the depths from reaching the Underking's realm (a similar wall will eventually be constructed on level 4)

In addition to various tunnels leading back into the unmapped tunnels on depth 4 (and down to levels 8, 9, and 10) there is the Pit of No Return, which prisoners who have REALLY pissed off the underking are thrown into.

If you fall in, you must fight your way through a randomly generated tentacle monster or be devoured horribly. This is just a abstraction of all the sloshing slime and tentacles trying to kill you. If you fall to 0 stat you can't escape without help and even if you do you're seriously fucked up and might be worse than dead (phasms are basically super doppelgangers so the bodysnatching covers them)
Tentacle monsters have 11 AC and 8HD, but you're limited to short weapons like daggers and fists. People up top though, need long weapons to assist you. It's assumed you always catch yourself about 1d10 feet down if you fall in, but if you somehow get thrown deeper in you must fight a new tentacle for every 10 feet you must climb to escape. If the party gets in in their head that they want to KILL the pit of no return, they'll need something amazing. A few barrels of burning oil and all your arrows isn't even close to enough.
Anyway if the players ever lose to the Elite Guard and/or the Underking they'll probably survive, but be thrown into this pit after languishing in the dungeons for 1 day.

Also of note is the
Cathedral of Bloodiest Gold
Which is where the 5th level vampire fighter high priest lurks with a fountain of blood and a fountain of molten gold and is bad news all around. If this guy is killed, then his vampire nun underling on the 4th level upgrades to full vampire. Also since there's supposed to be a medusa down here, lets just make this guy have a paralyzing gaze attack that 'curdles your blood with fear,' draining your wisdom by 1d6 whenever you see his eyes (save not to see his eyes each combat round). At 0 wisdom you can only shiver in fear.

In addition to the high priest, there's 1d3+2 flamebrother salamanders who will be called to defend the temple if the fight starts going bad- but actually, they'll be molten gold demons in the fountain that are really bad news to fight in melee on account of basically being lava elementals. They are slow but are like roving 5d6 Fireballs just by getting too close, and the fight should mainly be with the vampire knight priest as the players are driven back through aisles of flaming pews by the advance of the molten gold demons. To stop them, the altar or fountain should be destroyed.

There are also some catacombs beneath the cathedral where a spectre and d3+1 shadow mastiffs? can be found. Let's just call these more shadow people, one of whom has extra magic powers- perhaps before the God of Bloody Gold came, this was a temple of shadow. Maybe they'll help if the players swear to convert. Probably after that shadow mirror in Carrol's mansion.

We come to the biggest route outta this place- the
Road of Wyrms
There is a dragon here, attracted by the scent of gold, but hesitant to brave the Garden. It's supposed to be a 'copper' aka 'good' dragon so this dragon shouldn't be out to eat the PCs, it just wants treasure. It could probably be enlisted to help raid the place with sufficient bribery and flattery.

The Slaad- The encounter wanted there to be a red slaad. Slaad are giant humanoid frog 'chaos' monsters that come in very conveniently color coded hierarchies. Unfortunately for the Slaad, they only appear on a 7 on a 1d6 because that's a helluva lot more 'chaotic' than anything Slaad are capable of. Seriously, Slaad are really lame and unchaotic for the face of chaos in D&D.
Posted by Wizzzargh at 9:03 PM