OG Catoblepas
A sort of cross between a basilisk and a an anklyosaur, with a bashing tail that can stun via it's own percentage mechanics rather than saving throws (though the percentages improve by level in 5% increments so it's really quite curious why they didn't just use a save).

The gaze likewise allows for no save, and instead relies on other percentage chances- rolling a 2 for surprise indicates someone has met ts gaze and is dead, no save, and otherwise there is only a 25% chance the catoblepas uses its dread gaze, this chance increasing by 15% per round if neither party nor catoblepas moves, and 10% otherwise. Bizarrely, it also specified that a fleeing victim, even with eyes averted, is subject to the death gaze, though a saving throw is given here.

Apart from the stunning and the death gaze percentage weirdness, they don't have much going for them- low ac and move mean they're easy prey for humans with bows, or heck, even long spears potentially.

"This nightmare creature is loathsome beyond description and has no redeeming features." 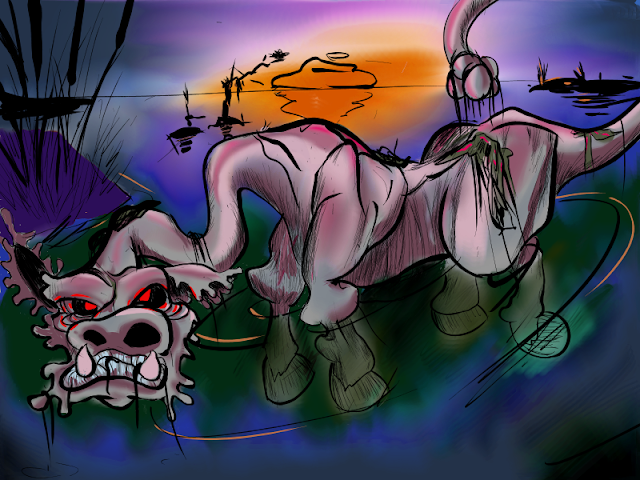 The Bog of the Canal is a watery place, more suited to canoeing than wading, and there are a dozen castles along the titular canal that have seen the rise and fall of many a minor noble house. One was the Catoblepas family, who upon acquiring dominion over a small piece of that wretched and watery realm, immediately set about taxing its people into destitution and squandering their wealth on frippery and luxury. Eventually, the complaints of merchants guildmembers who were losing money on every trip past Castle Catoblepas reached the ears of higher nobles, and the disparate King, Queen, and Prince each sent their representatives (armies) to negotiate their claim (besiege the place). At first of course, the armies fought each other bitterly, turned against each other by the Catoblepas, but as the sieges and false surrenders and rotating alliances and betrayals grew stale, eventually all three armies united and sacked the castle with the help of a horde of revolting and revolutionary peasants, an alliance so unlikely that some doubt the veracity of the tale.

Rather than go quietly to some cushioned house arrest at a relatives though, the Catoblepas turned bandit, their gold and family slowly dwindling as they sought to reclaim their seat of power. Cannons were mounted on rafts and sunk after firing a single shot, men and monsters were hired with the jeweled rings off the Catoblepas' fingers, and the wicked desposed nobles continued their brigandry even after the castle was burned down and naught but villages remained, and indeed, even unto the death of Riikhus. The lands were left to ruin in the 4th intersolar period, every human retreating behind the stone walls of the greatest castles(the slimy Canal Keeps certainly not qualifying), and one might suppose the Catoblepas finally had dominion once more, as none remained to contest their claim.

But a new sun was born a generation later, and humans came to resettle the region. There was a certain obstinate monster endemic to the local swamps now, though. Pig-headed, brutish things who paddled stubbornly through the deep bog despite being hooved creatures, colored pale dun, though the color was invariably stained by mud and algae, and with a lumpy head and lumpy tail on oversized necks and tails that made both backside and face largely interchangeable, though the ass was surely the handsomer end of the thing. Ignoring them was the best course of action, as their dread gaze was of little relevance to a speedy tread or paddle, and they could be kept out of civilized lands by setting up fences of small wooden spikes driven into the ground that young folk can leap over with ease, but the monsters see level with their eyes and are turned away by.
Whether they truly are transformed humans who forgot their forms in the intersolar darkness, symbolic dream-creatures from the nightmares of those who perished in the bog, or simply a new breed of unnatural monster born of slime and darkness, they were jokingly named Catoblepas by sassy peasants, and the name stuck.